The Ocean Gyres will be our legacy to future generations

What happens to all the plastic bottles, packaging, straws and food containers that we throw away every day? The trash bins are cleared regularly and from then on it is none of our knowledge as to what happens to our plastic waste. You might think it goes to the nearest recycling facility. The truth is that only 9 percent of the plastic trash is indeed recycled. So where does the rest go? The answer is: in the ocean gyres.

Plastic and The Ocean

Unfortunately, much of the plastic we throw away finds its way into the sea. Every minute (yes, every minute!), the equivalent of a truckload full of garbage enters the ocean. Much of it is just dumped there on purpose, as you can see in this shocking video.

In more industrialized cities, it happens when plastic gets blown away while being transported through the cities. Plastic is so lightweight that it easily gets blown out of trash bins or trucks. Once it is cluttered around, it ends up in drains and rivers from where it eventually reaches the sea.

There is, of course, much more to it than can be explained in these few sentences. If you want to know more about how plastic ends up in the ocean, read this article about the cause of water pollution.

What are the Ocean Gyres?

All of the plastic that ends in the sea eventually finds its way to the ocean gyres. The ocean gyres are circulating systems of currents where the water moves sluggishly. The slow currents create a vortex that collects all the plastic from the whole ocean and locks it in. Once trapped there, no plastic leaves those gyres again. 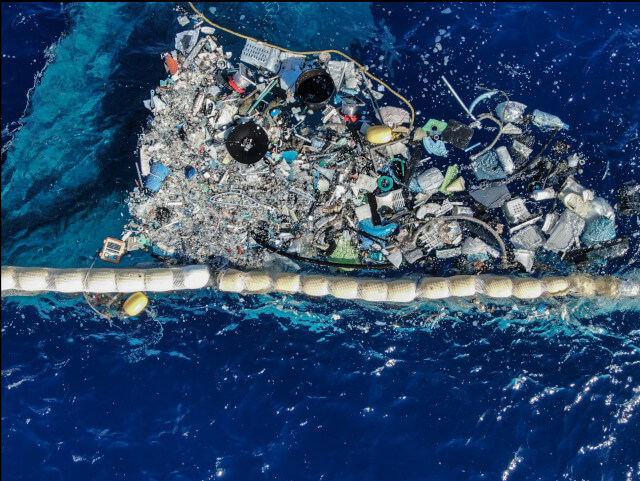 In the media you often hear the term "plastic islands" but the gyres are, in fact, rather "plastic soups". If you cross the gyres you will not find a solid carpet of rubbish, and sometimes you do not see anything at all on the surface. That's because only three to five percent of all the plastic trash floats on the surface. The rest is suspended just below the surface or sinks to the ocean floor.

That is why satellites and airplanes are not able to detect the ocean gyres, much less determine their true size. Scientists can only estimate.

To date, they found five, possibly six of these "garbage soups" in the world's oceans, the 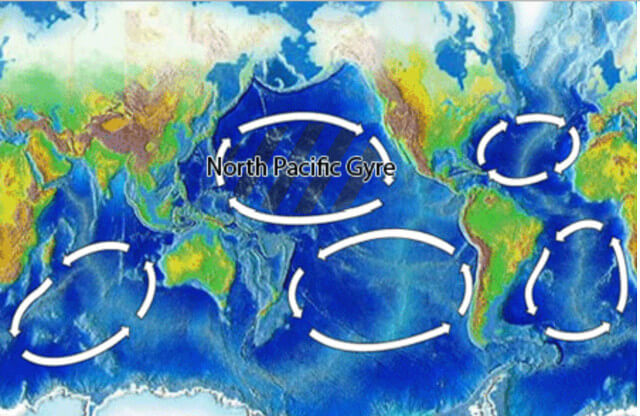 All of these gyres collect large amounts of trash. One, however, is of particular interest to scientists and has made headlines due to its sheer size. It's in the mid-Pacific ocean located between Hawaii and California: The Great Pacific Garbage Patch (GPGP).

Effect of the Ocean Gyres on Marine Life

The plastic floating in the Great Pacific Garbage Patch and the other ocean gyres is much more of a problem than we can imagine.

This plastic becomes a great danger for all marine wildlife in proximity to the gyres. They often cannot distinguish between food and plastic particles. Large marine animals like whales ingest large quantities of plastic together with the water they use to collect their food. Turtles mistake plastic bags for their favorite food, jelly fish. Sea birds feed their chicks with plastic that they find on the ocean surface.

Many marine animals die because of the accumulation of plastic in their stomachs and their digestive tracts. I wrote about a young sperm whale that was found dead with 64 pounds of plastic in its stomach! Only 2 days later, a pilot whale was found with over 80 plastic bags in its stomach, weighing around 18 pounds! This is not normal.

The dangers of the ocean gyres do not stop with large plastic particles. Although plastic never biodegrades and does not completely break down for hundreds or even thousands of years, small particles continually break off from the plastic. These small particles are released into the ocean and often contain bisphenol A, phthalates, DDT, and polychlorinated biphenyls. All of these chemicals are highly toxic. Marine animals consume and breathe in these microplastics. These substances are then consumed by humans through seafood. They are known to cause problems with the immune systems, hormonal imbalances, liver disease, and issues with childhood development.

The Ocean Gyres can never be cleaned up - our legacy to future generations?

Plastic has quickly become a viable threat to all animals in the ocean, from the smallest plankton to the largest whale. And eventually, to us.

And since it does not ever go away, it will continue to do so for hundreds and thousands of years.

There is an innovative project called The Ocean Cleanup that is trying to clean up the larger parts of the floating plastic debris. But the ambitious project will not succeed in completely ridding the ocean of all plastics, not even of all the large plastics. No, the plastic that is already in the ocean will stay there forever.

There are things that everyone can do in order to lower their plastic footprint on the planet.

It is safer for both the environment and you.

Here is a short list of things you can do to prevent the pollution of water.

Also have a look at this article.