what is The Problem with Plastic?

Nobody will disagree that the invention of plastic was a blessing to humanity. Without it, there would be no computers, no TVs, radios, phones, cars, or furniture today. Most plastic items are incredibly useful and important. Compared to other materials, it’s light, durable, unbreakable and can be molded into every shape imaginable.

Yes, the triumph of plastics is unprecedented. So much so that after the Stone Age, Iron Age and Bronze Age, scientists say the world has entered a new age that will shape the face of the planet forever: the Plastic Age.

However, it is exactly those lightweight and durable characteristics that make plastic the curse of modern society. Why? Because it created an on-the-go throwaway lifestyle that our planet can’t handle.

so what is the problem with plastic?

Problem No. 1: Only 9% of all plastic trash is properly recycled

According to Plastic Oceans, we are producing 300 million tons of plastic each year. 50% is thrown away after a single use. Now, you might say that it all gets recycled, but that’s not the case. 91% of all produced items end up in landfill, in the oceans or are incinerated.

The reasons lie in the production process: Whereas the life cycle of paper, glass or metal is complete, the one for plastics is not.

So, a glass bottle can be re-made into a glass bottle again and again without loosing its quality or purity. The same is true for stainless steel. A plastic bottle, on the other hand, can never be made into a plastic bottle again. It can only be downcycled into a lower-quality product (like a doormat). Why? Because unlike glass or stainless steel, it is a synthetic material made of fossil fuels. During the recycling process, toxic chemicals are released from the product, and since these chemicals pose a health risk, recycled plastic products are considered unsafe to hold food or beverages. That is why your water bottle or food container can only be remade into a less useful product. After downcycling, this second-life product is usually unfit for another round of recycling and goes to a landfill.

Finally, most items do not consist of one single kind of plastic, but are a mixture of different components, some of which are easier to recycle than others. Because it is very difficult to separate these components, most facilities don’t bother. For the plastic industry, it's cheaper to produce new products. For the municipalities, it's cheaper to send the waste to landfills. And consumers often do not know which products can be recycled. The plastic recycling codes molded into the bottom of each product are meant to eliminate the confusion but, unfortunately, do not reveal as much information about their recyclability as we would like.

Once the item ends up in a landfill, it stays there for hundreds of years. Or it is blown away by the wind and enters the rivers and the oceans.

In total, more than 8 million tons of plastic find their way into the sea every year.

Already today, there is 6 times more plastic than plankton in the oceans, killing more than 1 million birds and countless marine creatures every year. This figure will increase dramatically in the near future. 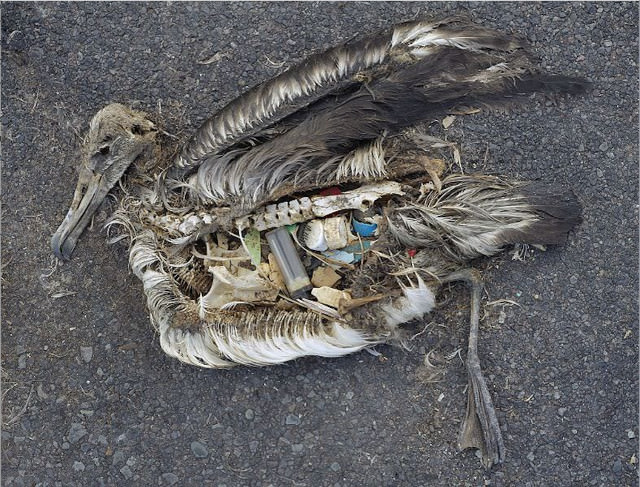 Albatross chick with a stomach full of plastic

Problem No. 2: Plastic never goes away

Every natural material on earth biodegrades or decomposes into nothingness, leaving no trace on the planet. Plastic does not. It never goes away. It only breaks down into smaller and smaller pieces. A straw needs about 200 years to do so, a plastic bag 450  - 500 years.

What does that mean? Apart from the very small percentage that’s incinerated (thereby releasing toxic chemicals into the atmosphere), every single piece of plastic that’s ever produced is still somewhere on the planet in one form or another. They entangle and choke seals and dolphins, clog the stomachs of birds and turtles and poison fish and crustaceans.

Once the product has broken down into small pieces less than 5mm in diameter, they are called microplastics. Those are ingested by krill and plankton, which are then eaten by larger fish, thus making their way up the food chain and finally onto our plates.

Problem No. 3: Plastic is dangerous to our health

About 8 - 10% of our total oil supply is used for the production of plastics, that’s 12 million barrels of oil per year in the US alone. To make it soft and moldable, toxic chemicals like phthalates (softening agents or plasticizers) are added. Nobody knows which compounds exactly are used in the production process (it's an industry secret). What we do know is that the chemicals leach out of our food containers or water bottles and migrate into our food.

In addition, when these items break down into smaller pieces in the ocean, the chemicals are a) released and b) attract other toxins like a magnet. Those then accumulate in ever higher doses in the animals along the food chain, again ending up on our plates.

Besides, these chemicals have been linked to various types of cancer, infertility and hormone disorders.
Today, 93% of all Americans have bisphenol-A (BPA), a toxic chemical leaching from plastics, in their bloodstream. Talk about food poisoning.

Or the already mentioned plastic bags. More than 1 million plastic bags are used per minute, that’s about 500 billion per year worldwide. The average 'life span' of a plastic bag is 15 minutes, but it has 500 years to choke turtles and clog the stomachs of whales, dolphins and other sea animals. And that's just one bag. 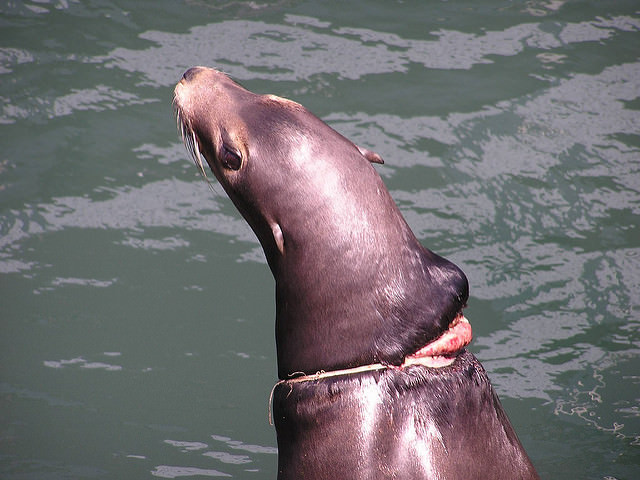 How Can we solve the problem?

Cleaning the oceans will not do it. By now, there is so much plastic in the ocean that it's impossible to ever clean it up. Yes, humans have changed the composition of the sea forever.

Recycling alone will not solve the problem either. There is simply too much of it.

Therefore, we have to concentrate on preventing any plastics, especially single-use ones like bags, straws, cups and bottles, from entering the oceans in the first place. We can only do that by drastically reducing the production of any throwaway, non-degradable materials. Of course, the plastics industry will not do that freely. They make over 900 billion US Dollars with a waste product that would otherwise be useless. It's up to us to initiate the change.

Earth is choking on our invention.
We have created an indestructible material but have no clue how to dispose of it. It’s time to find out.