SPERM WHALE DIED FROM A STOMACH FULL OF PLASTIC

In February 2018, a young sperm whale was found dead at the coast of Spain near Murcia.

Scientists performed a necropsy and were shocked by what they found: The whale had swallowed 64 pounds of plastic!
The content of its stomach included plastic bags, nets, ropes, sacks and even a jerry can.

It looks like the whale was unable to digest or expel the plastic which caused an inflammation of the stomach and, ultimately, a gastric shock.

As you can easily see from the picture, the whale was severely emanciated. While a grown male normally weighs 120,000 pounds, the one found in Spain weighed only 14,300 pounds.

It literally starved to death with a full stomach.

This was not the first tragic incident that shows us how animals suffer from the consequences of our careless and convenient lifestyle.

In 2016, 13 (!) sperm whales beached on the coast of Germany, all of them had a large amount of plastic debris in their stomachs.
This incident prompted Greenpeace to launch a campaign to increase awareness of what we are doing to our oceans: 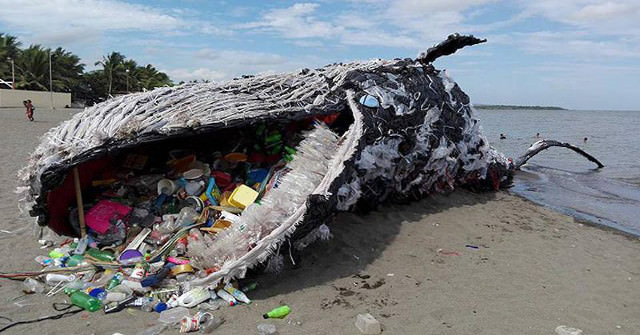 Sperm whales are, like so many other marine creatures, classified as endangered species.

Their diet usually consists of squid, crab, shrimp and fish. Males can grow to around 60 feet, females to around 40 feet. The young male that beached in Murcia was 33 feet long.

The city of Murcia also launched a campaign against dumping plastic waste into the waterways.