Water Pollution causes and why we are guilty, too

Water is a vital resource for every being on the planet and yet, the pollution of water bodies is one of the major environmental threats of our time. Oil spillings, industrial waste or the widespread use of pesticides contribute greatly to making freshwater sources undrinkable. Perhaps the main cause of water pollution, however, is the ever increasing level of plastic around the world.

More plastic products were produced in the first decade of the 21st-century than the total plastic produced up to the year 2000 in the 20th-century. It is not a coincidence that the rise of polluted water bodies comes at the same time as plastic has been growing in importance for the fossil fuel industry. In the U.S. alone, the fossil fuel industry is anticipating a 40 percent rise in the production of plastic produced from fracked gas. This is a great cause of concern as groundwater supplies are affected by the extraction of natural gas.

How does plastic end up in the ocean?

About 80 percent of ocean plastics come from land-based sources. That means they are washed through storm drains or left on beaches by humans before being picked up by rising tides.

It has been estimated that around 51 trillion pieces (around 150 million tons) of plastic waste have already made their way into the oceans of the world. Since the dawn of plastic in the 1950s, every piece of plastic ever made is still intact somewhere. Across the planet, there are five major accumulations of plastic waste in the oceans, one of them is the Great Pacific Garbage Patch. In early 2019, this area of ocean between the state of California and Hawaii is twice the size of Texas and growing each day. The issue is made worse by the additional eight million tonnes of plastic that are washed into the ocean each year. 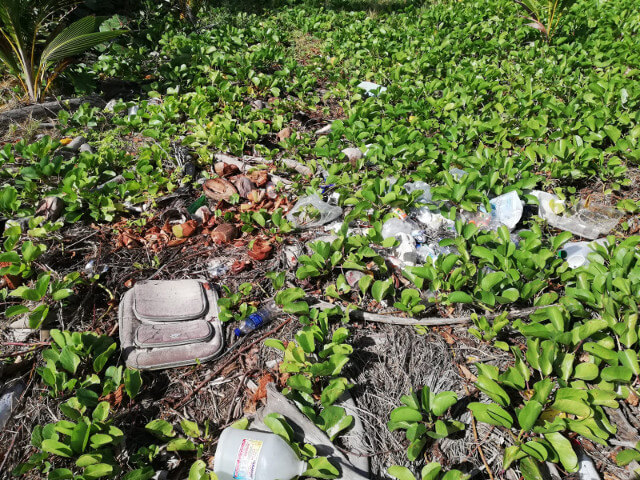 The things you find at a beach - Photo: Seas & Straws

Asia and especially China are one of the largest contributors to water pollution.

90-95 percent of all plastic pollution in the oceans comes from just 10 rivers: The Yangtze, the Indus, the Yellow River, the Hai River, the Nile, the Ganges, the Pearl River, the Amur River, the Niger, and the Mekong. As you can see, eight of those rivers are in Asia, two in Africa. That makes Asia the "epicenter for plastic waste leakage". Of the eight million tons of plastic waste, the Yangtze alone dumps up to an estimated 1.5 million tons into the Yellow Sea every year.

So, the industrialized nations have nothing to do with the cause of water pollution? Well, it's not that easy.

The question we should be asking is why Asia's rivers are so polluted. There are many answers to this question. 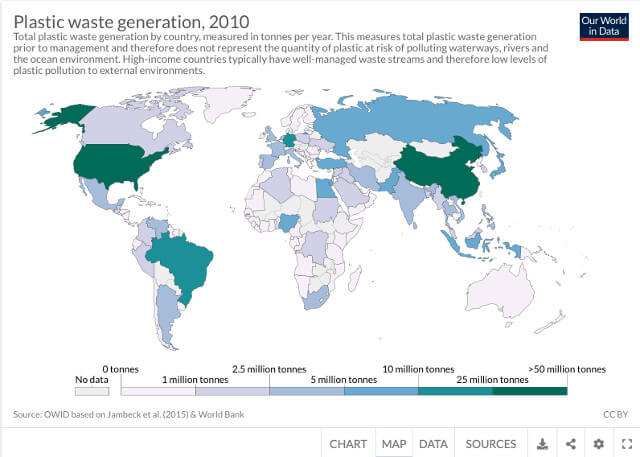 Plastic Waste Generation in 2010. Photo curtesy of A World in Data under Creative Commons Licence.

Combat the pollution of water by plastic products

Understanding the cause of water pollution by plastic waste is key to addressing the problem.

Last year, China announced that it will not take the first world's plastic trash anymore, which led to a whole new set of complications (you can read about them here). Where does all the plastic go now? We are certainly not equipped to handle it. Europe and the USA have tried to sell their recyclables to Indonesia, Malaysia or Thaliand instead but these countries, too, have announced a ban on foreign plastic waste.

There can only be one solution: we have to stop producing millions of tons of plastic every year. And we have to avoid using plastic wherever we can in our daily lives. A few of the simple steps you can take to limit adding to the pollution of our precious water ecosystems can be found here.

Small changes to your habits will help preserve the environment in the future.