the Great Pacific Garbage Patch (And can you walk on it?)

What is the Great Pacific Garbage Patch?

The Great Pacific Garbage Patch (GPGP) is the largest and most (in)famous of the five (respectively six) ocean gyres (if you want to read more about what an ocean gyre is and how it forms, click here).

It is located in the North Pacific Ocean (between Hawaii and California) and collects trash from Asia, North America and South America. Most of the trash comes from China. (China alone is responsible of 30% of all worldwide plastic pollution. Together with Indonesia, Philippines, Thailand, and Vietnam, they dump more plastic in the sea than all other countries combined.)

What is the Great Pacific Garbage Patch made of?

The vast majority of marine debris is plastic (mostly consumer goods like plastic bottles, bottle caps, straws, bags, cups). These items do not decompose or biodegrade like other, natural, materials. Instead, they only break down into smaller and smaller pieces until they become invisible for the naked eye. They are still there, though, either floating just below the surface or sinking to the ocean floor.

The majority of the larger trash (60%) is made up of discarded fishing gear like ghost nets or buoys. 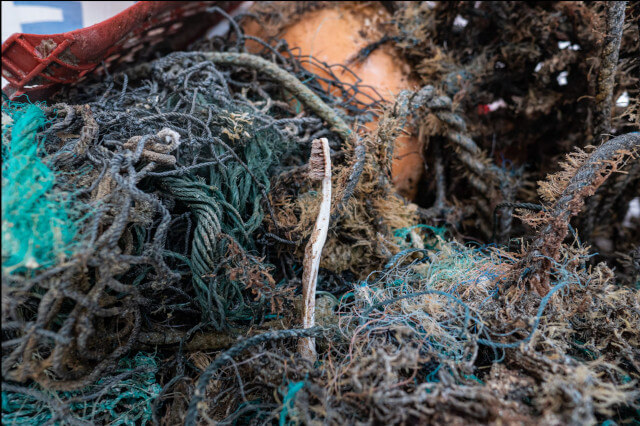 A toothbrush stuck in a ghost net in the GPGP. Photo: © The Ocean Cleanup

How much garbage is in the Great Pacific Garbage Patch?

This large "island" of floating garbage was already noticed in the 1980s. Since then, it has grown exponentially in size and with speeding tempos to an extent that it now covers an area of 1.6 million square kilometers! That's more than twice the size of Texas! The estimated density of the rubbish varies between 100 kilograms per square meter in the densest spots and 10 kilograms per square meter in the periphery. In total, there are more than 1.8 trillion pieces of plastic in just this one patch (and there are five more)! Scientists estimate that the total weight of all the rubbish in the GPGP amounts to an incredible 87,000 metric tons. 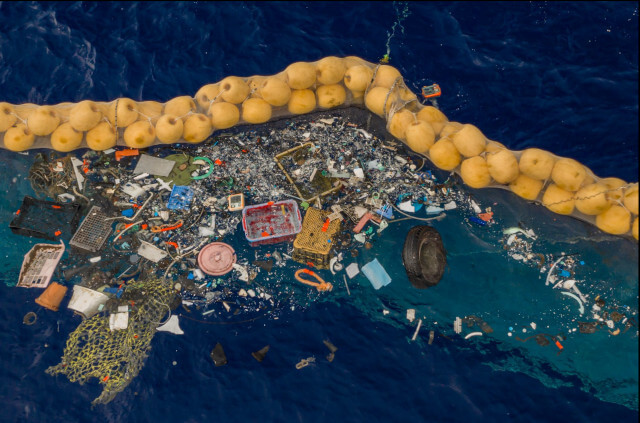 How much does the Great Pacific Garbage Patch grow every year?

Because the GPGP is not a single "carpet" of rubbish, it is impossible to say how big it is or how much it grows every year. Most of the debris in the vortext is microplastic with less than 5mm in diameter. Some of it is suspended below the surface, but 70% sinks to the ocean floor. Those microscopic pieces, mostly invisible to the naked eye, cannot be counted. But with more than 8 million tons of plastic entering the ocean every year, it's sure to say that it will continue to grow exponentially. In 2014, a research expedition measured 100 times more plastic by weight than there was 17 years ago.

Can you walk on The Great Pacific Garbage Patch?

No, you cannot. Most of the debris floats below the surface and cannot be seen from a boat. It's possible to sail or swim through parts of the Great Pacific Garbage Patch and not see a single piece of plastic. You will, however, notice that the water is not clear and looks rather like a cloudy soup. That's because those microscopic pieces of plastic will be all around you.

Every now and then, you'll find some bigger pieces like abandoned fishing nets or buoys, sometimes shoes or even TV screens. 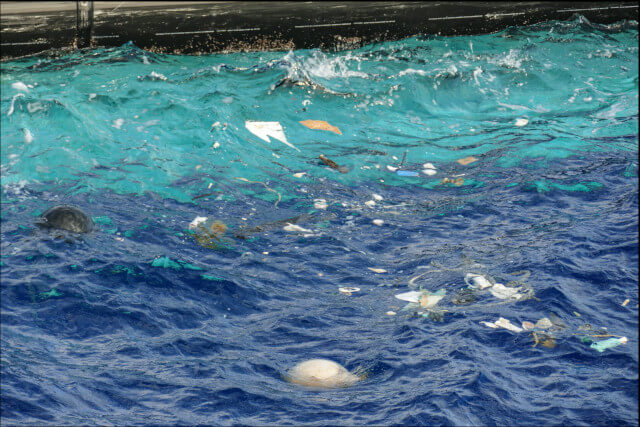 Plastic debris in the GPGP. Photo: © The Ocean Cleanup

Can you see The Great Pacific Garbage Patch from space or on Google Earth?

No, for the same reason that you cannot walk on it. Most trash is microscopic and suspended below the surface or sunk to the ocean floor. You won't see anything from above.

Is anyone cleaning the Great Pacific Garbage Patch?

Not really. No country feels responsible for cleaning up the mess. First, because it's not financeable. Charles Moore, the captain who discovered the GPGP in 1997, once said that it's impossible because it would financially ruin every country that tried it.

There are a few private companies that try to pull as much plastic from the ocean as they can. One of them is The Ocean Cleanup Project that invented a machine that catches plastic from the ocean surface. But even an ambitious project as The Ocean Cleanup will never manage to clean all of the GPGP, or even a fraction of it. It can catch the bigger parts like ghost nets but those trillions of tiny microplastic pieces will stay in the ocean forever.