Why the world needs the Ocean Cleanup 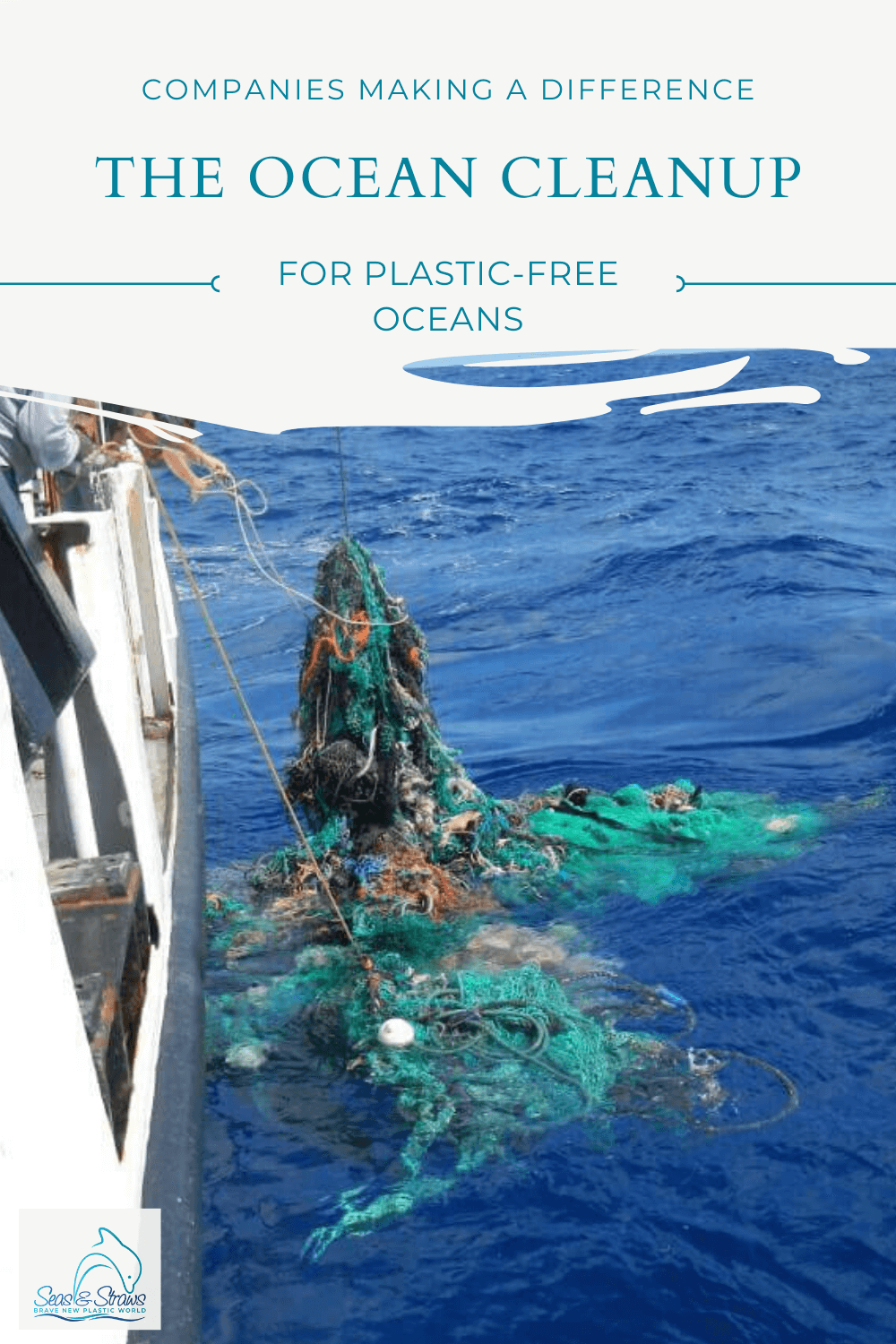 In 2013, burgeoning Dutch inventor Boyan Slat turned his attention toward the escalating problem of plastic pollution in our oceans. He founded The Ocean Cleanup in the hopes of developing an economically feasible way of cleaning up the struggling oceans. The primary focus Boyan Slat established in that endeavor was to use the project to clean up the Great Pacific Garbage Patch (GPGP).

Located between California and Hawaii, this is a gyre created by the converging of oceanic currents, which attracts plastic products like a magnet. Those plastics remain circulating in the area, until they're broken up into microplastics, which area sea life mistake for food. There are close to 80,000 tons of plastic accumulating in the Great Pacific Garbage Patch, which is why this area is such a big concern for researchers and scientists.

But cleaning up this ecological disaster is problematic. Using vessels and nets to clear the area would require the use of equipment that could further contaminate the environment. Additionally, a vast wealth of resources needed, including ships, fuel and labor, makes it a costly operation. Considering these factors, Boyan Slat tasked his team from the start with finding an eco-friendly and cost-effective solution. 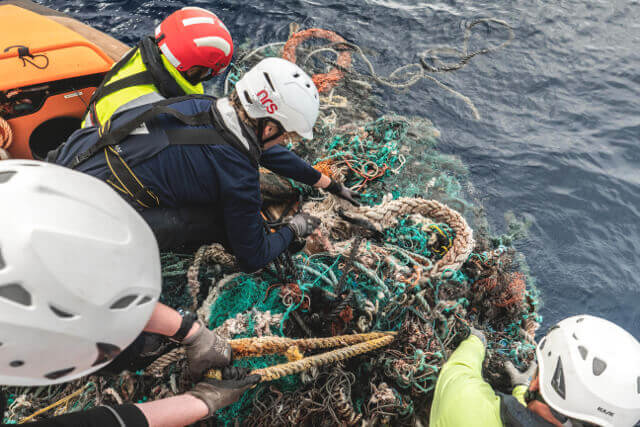 Boyan Slat developped a passive system, which would meet his financial and ecological concerns. The system developed for use involves a 600-meter-long floater that sits just on the surface of the water. Attached to it is a tapered 3-meter-deep skirt. The floater serves as a barrier that prevents plastic from passing over the skirt, which collects the debris as it naturally flows in the path of the system. 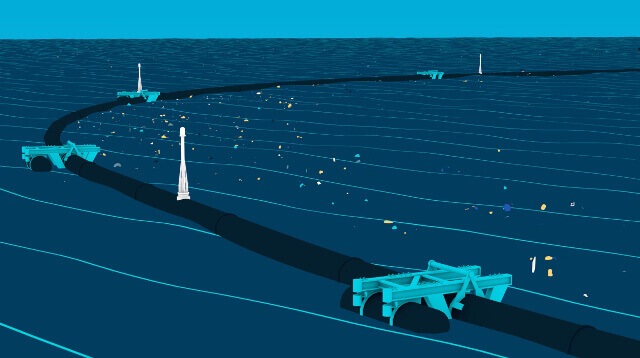 By doing so, The Ocean Cleanup estimates that it will only take five years to remove over half of the debris in that region of the ocean.

Once collected, the plastic will be returned to land, where it can be recycled and sold as promotional product. In selling the recovered plastic, Boyan Slat hopes to raise enough revenue to build additional fleets of his clean-up vessel. These will then be deployed to other gyres, where plastic debris has created additional ecological hazards. 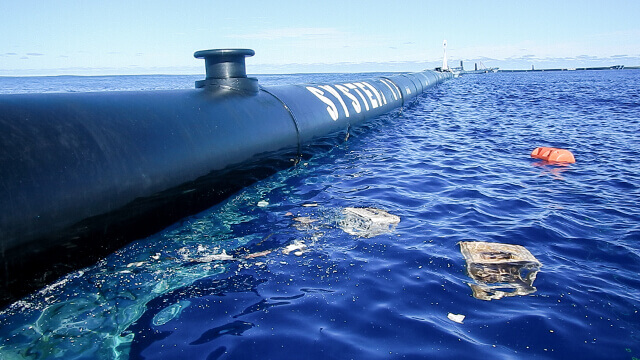 The Ocean Cleanup Responds to Criticism

From the very beginning, Boyan Slat's ambitious project was met with criticism, the main arguments being:

One of the primary concerns among critics was recently expressed by Eben Schwartz, who works as the Marine Debris Program Manager for the California Coastal Commission. In a statement, he mentioned that the system only catches debris floating near the surface of the water. This is only a fraction (3-5%) of the total debris polluting our oceans. 95-97% sinks, washes back on shore or breaks down into microplastic. In this way, Mr. Schwartz suggests the system may be too ineffective to fulfill the promise of cleaning the oceans by 2040.

Responding to the criticism, Lonneke Holierhoek, COO of The Ocean Cleanup project, said the team is still working on improving the system. She added that the project is dedicated to making socially responsible decisions, as they attempt to resolve the problem of marine pollution. The organization is continuously attempting to address concerns that will help them improve the clean-up project.

Another concern is that, as a passive system, these floaters won't make the distinction between debris and marine life. Many are concerned that the system will ensnare creatures living in the sea, which will undermine the efforts of the project.

Ms. Holierhoek also responded to this concern, explaining that the possibility of the system harming marine life was something they addressed early on. Technicians and engineers were asked to make this possibility a chief concern and, as such, the system was developed to minimize the negative impact the project has on the ocean's eco-system. She stressed that the system was designed specifically in a manner that ensures sea creatures won't become entangled in the tapered skirt.

Boyan Slat himself responded to sceptics: "I think if you look at this sort of technology, every new invention has been met with skepticism and pessimistic views," Slat told Business Insider. "There will always be people saying things can't be done. And history shows that time and time again things 'couldn't be done' and they were done ... I think asking questions is very valid, but that doesn’t mean we shouldn't do it."

Praise for The Ocean Cleanup Project

Meanwhile, the project has also received its fair share of praise, having been featured in a number of peer review journals. Just some of the publications in which The Ocean Cleanup has been featured include:

Other environmentalist organizations have also expressed support for the project, despite of what scientists say. Everything that helps clean debris from our oceans is a good thing.

Granted, Slat's plan to completely clean the oceans within a few decades may seem overly ambitious. However, there's no denying the positive impact the project is already having. It brought an environmental disaster that few people knew about to the attention of the public. (This is a good thing, despite scientists' fear that it will steal attention away from stopping plastic from getting into the ocean!). Public support continues to grow as the organization creates great transparency for its accomplishments, but also its setbacks.

We will soon see how well this system functions in real-world conditions. After an extensive testing period in the North Sea, the first system was towed out to the Great Pacific Garbage Patch on September 8th 2018.

Personally, I cannot understand why so many seem to oppose the idea of the project. There is no doubt that The Ocean Cleanup is just one small part of a much larger problem, but you've got to start somewhere. Boyan Slat started, and while scientist still debate if his device can clean up 3 % or 50% of the GPGP, one truckload full of plastic garbage is dumped into the ocean every minute of every day. I agree that plastic has to be stopped from entering the ocean. At the same time, we have to start thinking about solutions to clean up the mess we already created in the ocean gyres. Boyan Slat was the first one who provided a solution that researchers have been searching for years. I say, give him a chance, we have nothing to lose.

"I generally also think that if you want a fast solution it's best to work with human nature than against human nature. I think technology is really the best way to do that. What humans aren't good at is trying to consume less, to consume less plastic, to not be lazy".