The Antarctic sea was always believed to be the last remaining unspoiled place on earth. Not anymore.

They also took samples from freshly fallen snow and documented the same findings. That means the rain or snow was already contaminated when it fell to the ground (so the chemicals are in the air). 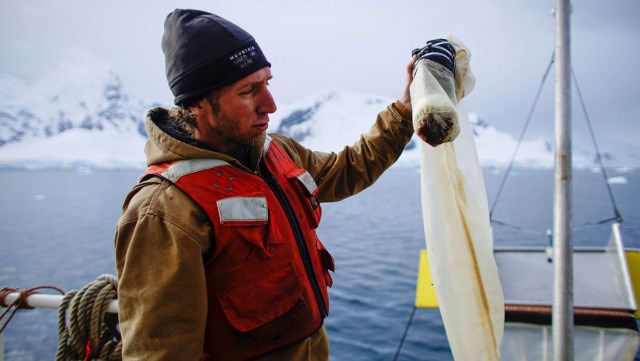 What is microplastic, you ask? Microplastics are tiny beads of plastic used in the majority of cosmetic products such as peelings, washing gels or toothpaste. In addition, every piece of plastic ever made will eventually break down into microplastic, from the disposable coffee cup to camping chairs to car tires.

The fact that microplastics are found in Antarctica is as surprising as it is depressing. The Antarctic sea is very secluded and usually does not mix with other waters, so it was always considered to be a natural barrier to man-made pollution.

The findings prove that even the most remote areas of the planet are not immune from the impact of manmade pollution.

Frida Bengtsson of Greenpeace said that “Plastic has now been found in all corners of our oceans, from the Antarctic to the Arctic and at the deepest point of the ocean, the Mariana trench. We need urgent action to reduce the flow of plastic into our seas and we need large-scale marine reserves – like a huge Antarctic ocean sanctuary which over 1.6m people are calling for – to protect marine life and our oceans for future generations.”

Plastic everywhere, from Antarctica to the Arctic

At the other end of the world, in the Arctic sea, scientists had already found record amounts of plastic trapped in the ice.

There, every single sample they took was contaminated with plastic particles, sometimes as many as 12,000 (!) in one litre of sea ice.

Even the famous Great Pacific Garbage Patch has a much lower concentration of plastic per litre of water.

All in all, fragments of packaging, paint, nylon, polyester and remains from cigarettes were documented.

In some remote areas, they found record levels of polyethylene which are believed to come from the Great Pacific Garbage Patch. In other areas, it was nylon and paint which points at increased shipping and fishing.

Plastic is now one of the world's largest environmental threats, warns the UN. 60 countries are already taking urgent action, but it's far from enough. We need to act now.