"I want you to panic" - Greta Thunberg

Of course, Greta Thunberg is not fighting against the plastic pollution crisis per se. However, her vigorous and fearless fight against climate change and her brutally honest speeches are an inspiration to me and deserve a blog post. :-)

Who is Great Thunberg? 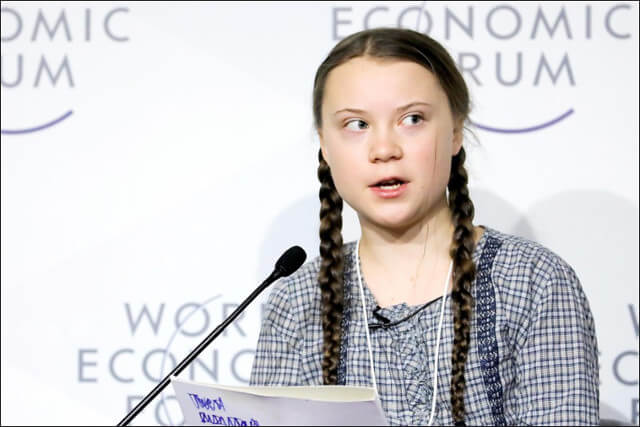 Greta Thunberg at the World Economic Forum in Davos

Greta Thunberg is a 16-year old Swedish school girl diagnosed with Asberger and selective mutism. Asberger makes her see the world in black and white. Unlike the rest of us, she is unable to hear a terrible message and then move on to day-to-day business. She ponders over it for days, weeks, years. Such has she done when she was first told about climate change. She could not understand how humans could have brought about the biggest crisis in history but now seem unable and unwilling to solve it. Selective mutism means she only speaks when she feels it's necessary. Clearly, she does so now because she is scared about the future. Not just hers but the future of the entire human race. A future that is very likely to happen soon, if we all do not act fast.

"You say nothing in life is black or white. But that is a lie. A very dangerous lie. Either we prevent 1.5C of warming or we don’t. Either we avoid setting off that irreversible chain reaction beyond human control or we don’t.

Either we choose to go on as a civilisation or we don’t. That is as black or white as it gets. There are no grey areas when it comes to survival."

In her single-minded fight, she meets presidents and the Pope, speaks to millionaires at the World Economic Forum in Davos, and holds a mirror to celebrities and business people.

At the presentation of the Golden Camera in Berlin, she addresses a hall full of the world's rich and famous. In that fearlessly candid way of hers, she accused them that they "will not stand up for climate justice because that will inflict on their right to fly around the world".

She got applause from the very people she just accused. (Why, I ask myself? Did they not understand what she was saying? Or did they not want to understand? Are they hypocrites, pretending to care when they don't?)

No matter, Great Thunberg roasts them all. She says what nobody else has to courage to say. Greta cannot lie, and she cannot be polite about it. And therein lies her unique strength.

While other climate activists and scientists always try to speak diplomatically and politically correct, always make sure so show a glimmer of hope on the horizon, always stress that the climate crisis can still be averted if we all work together - that everything will be all right - Great draws a bleak picture of lost hope.

She is neither diplomatic nor optimistic about it, but brutally honest.

She lists facts that are little known, probably because they were deemed too disturbing and alarming, too true to be made public. Like this one:

"According to the IPCC (UN Intergovernmental Panel on Climate Change) report we have less than 12 years left until we start an irreversible chain reaction beyond human control."

We have not even 12 years left to ensure the survival of the human race! This is a fact that should scare all of us. Politicians, diplomats, millionaires, the rich and the famous and every other human being on the planet. So why are we not appropriately scared? Because we don't know how dire the situation really is. Because we think it's enough to let the politicians deal with the problem, so long as we can go on leading our lives as before. We, the masses, the entire population, is not educated enough on the topic of climate change. Whose fault is that? Greta accuses the media of failing to do their job.

So she is doing it. She tells us the truth and wants us all to act and to treat this catastrophe as what it is.

"We cannot solve a crisis without treating it as a crisis."

Those are the points on her agenda:

"The climate is not going to collapse because some party got the most votes. The politics that’s needed to prevent the climate catastrophe—it doesn’t exist today. We need to change the system, as if we were in crisis, as if there were a war going on."

"We use 100 million barrels of oil every single day. There are no politics to change that. There are no rules to keep this oil in the ground. So we can't save the world by playing by the rules, because the rules have to be changed."

"If burning fossil fuels threatens our existence, why isn’t it made illegal?"

"We are in the midst of the sixth mass extinction, and the extinction rate is up to 10,000 times faster than what is considered normal, with up to 200 species becoming extinct every single day. Erosion of fertile topsoil, deforestation of the rainforest, toxic air pollution, loss of insects and wildlife, acidification of our oceans – these are all disastrous trends being exelerated by a way of life that we in our financially fortunate part of the world see as our right to simply carry on."

Everything she says is based on facts. She quotes only scientists and scientific reports. And those scientists all agree that our civilization will perish if we do not manage to get these problems under control within the next decade.

Will she succeed in making a difference?

She herself shees little success in what she is doing unless politics change drastically. Because as long as we live in capitalism, as long as the world is ruled by large corporations, lobbyists and greedy politicians, the climate will not play a decisive role. The current politics, based on money-making at the expense of everything else, is what got us into this mess. It will not get us out of it. That's why she demands a change in politics and a new set of regulations.

How feasible is that?

I don't think those in power will give up on their power just because a little girl demands it. They will listen to her patiently and then go on making money. They give her a golden camera and nominate her for the Nobel Prize and think they're done with it.

The Golden Camera event in Berlin was a great example of that hypocrisy: the event was sponsored by VW, and while Greta came with an electric car, the other winners of the Golden Camera were honoured with a VW SUV. Now, we all know that SUVs are the most environmentally friendly cars on the planet, don't we?

Greta knows that, too. Which is why she focuses on raising awareness and getting media attention. Because change can only happen if we all, the whole population, demand it.